“To drink sediment or not to drink sediment that is the question.” – a quote there from William Shakespear’s West Country cousin.
If you speak to enthusiasts about bottle conditioned cider and beers they will tell you its fine to drink sediment and its a source of vitamin B, but doesn’t really add to the taste. Others will say “it will just make one rather windy” and it’s best left in bottle. The Adelaide based Coopers Brewery encourages drinkers to rock the bottle around a bit to mix in the sediment. LOBO Cloudy Cider is unfiltered meaning some of the finer parts of the apples flesh makes it all the way from pressing to the bottle. These along with the dead yeast cells settle at the bottom. In a cunning move LOBO’s website says the following

Pouring LOBO cider, excellent over ice – invert the whole bottle. It can also be rolled gently or poured carefully leaving the sediment in the bottle, each method giving different levels of clarity. The flavour changes, experiment and see which you prefer.

Basically try it a few times in different way see what works for you. I didn’t pour mine over ice, instead I gentle poured the bottle of cloudy cider into the pint glass leaving the sediment in the bottle. I figure the LOBO looks thick and cloudy enough without adding the yeast cells back in.

LOBO is fermented at cool temperatures. This means that the yeast works slower allowing flavours time to mature. They also allow the freshly pressed juice time to settle before fermentation is allowed to begin. This is when the dark orange colour develops.

Thick and jammy apple sauce like perfume. There is a deep and sweet smell about it. There is a spicy cinnamon note floating in there too. 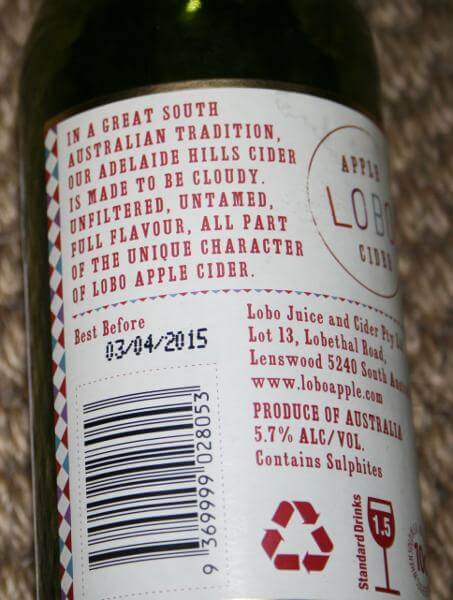 The super sweet smell doesn’t fully translate to the taste. Don’t get my wrong it is at the sweeter end of the spectrum but it doesn’t leave you with a slickly sweet taste on the palate. Instead you’re giving a deep gamut of flavours. As I try more cloudy ciders I realized that in those microscopic bits of macerated apple in suspension are where some awesome flavours live. They give it a thick texture that grabs onto your tongue. LOBO’s Cloudy Cider is low on fizz but holds a fine head.

LOBO Cloudy Cider is a quirky one. Fantastic artwork on the bottle. The bottle is a screw  cap, not twist top like a beer glass but like soft drink bottle, something I’ve never seen on an alcoholic drink. I’m more of a fan of the drier ciders but this has so much depth and character I would happily drink this again and again.