Fournier Doux is an bit of an elusive cider. The company’s website does little more than show images of the ciders they make including the Doux, a brut and a rosé. The bottle does tell us that the apples used in the cider are grown in their own orchards. That to me, is a massive part of “real cider”. I’m not saying superb real ciders can’t be made from brought in apples but they loose something in the terrior. It’s this soil to bottle mentality coupled with the traditional Normandy taste has seen them awarded a PGI by the European union.
PGI or Protected geographical indication Means that a product is typical of a region. The techniques used are traditional and unique to the culture of that region. The term Doux is a French term to describe the fact it is a sweet cider below 3% alcohol.

I served it chilled but not cold. The theory being with a traditional French cider it would have been drunk straight from the cellar so it should be served at cellar temperatures. 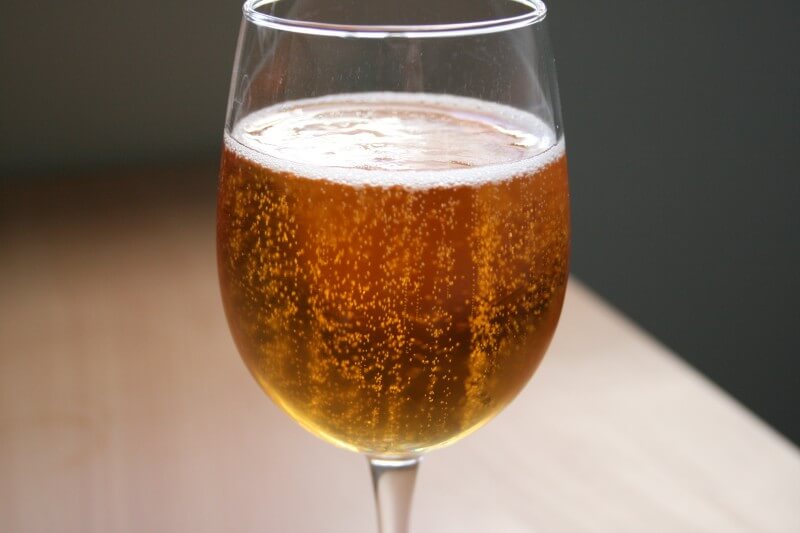 Deep orange with large vigorous bubbles that move quickly up through the intense orange colour. A complex floral aroma typical of French ciders. There could even be a hint of chocolaty sweetness.

Bitter sweetness and tannins working together in harmony. First is the sweetness that hangs around like an apple flavoured boiled lolly, while the tannins get to work drying your mouth encouraging you to take another sip. Such a low alcoholic drink it could almost be a soft drink with is bright orange colour.

I noticed that the bubbles that had been coming on so hard and fast when I poured the Fourier Doux had quickly dies down. This left me with a nearly still cider by the time I was half way through the 330ml bottle

There is very little information about this cider online so I cant tell much about what apples where used or the back story of the cider producers. However judging by the high sweetness and tannins coupled with the low alcohol I would guess that is is a “keeved” cider.

The Basic keeving process involves pulping the apples. The pulp is left to sit on the juice over night in cool temperatures. Oxygen soften the pulp and turns the juice a darker orange. This is then pressed to separate the bulk of the apple pulp from the juice. There will be some of fine partials of apple flesh suspended in the juice. Enzymes and chalk are pitched in which causes the pectin to turn into pectic acid. Now the fermentation starts to happen. The enzymes and the pectic acid react and form the flying lees or le chapeau brun as the French say. As the fermentation picks up the cider in under the flying lees turns particle free. Its this middle section that is syphoned off for bottling. Its a complicated technique that I am yet to fully appreciate. This French traditional technique has earned Fournir PGI status.

The Fournier Doux is sweet and low alcohol. I would prefer to drink this as an alternative Moscato. This might be a great drink for a girls afternoon gossip session (I assume). Its a great example of what a doux style cider from Normandy is all about.