A cider, by wine makers, Napoleone Apple Cider is a family operation that grows, presses and ferments the fruit themselves. This gives them total control over the end product, which has earnt them a silver medal in the 2013 Cider Australia Awards for medium ciders (specific gravity between 1005 and 1012).
The Napoleone family immigrated from Italy in the 1940’s settling in the Yarra Valley. They set about planting apples for the eating market. Today they have around 250 hectares of apple trees. In the late 1980 vines were planted and was later turned to wine sold under the Punt Road label.

If the Napoleone Apple Cider was a band, the smells of baked apple would be the lead singer, backed by a thumping bass line of heavy oak notes. All supported by the backup singer, cinnamon. 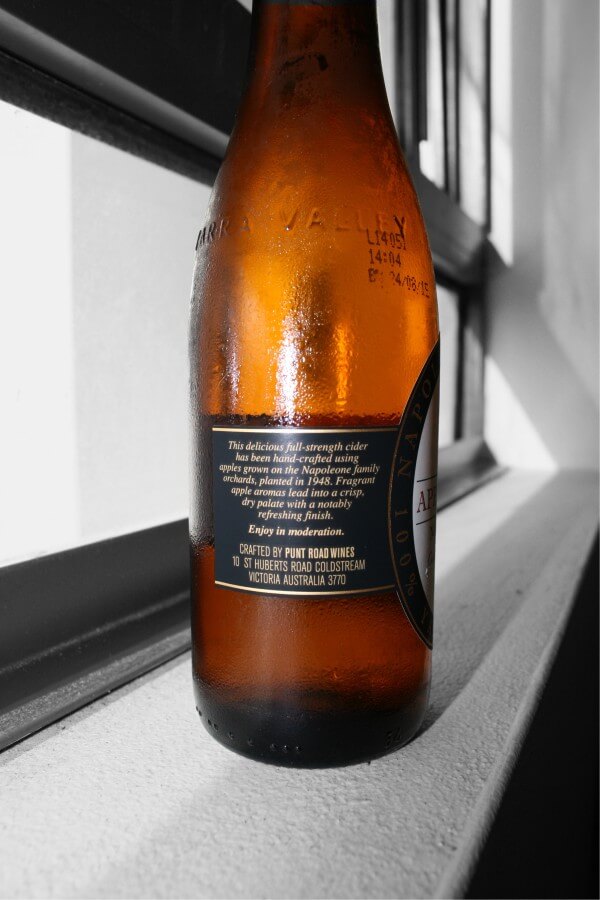 Very crisp apple flavours, the Napoleone remind me of a dry Sauvignon Blanc . The Apple flavours linger in a long finish, a touch of cinnamon spice, lightly carbonated and overall light and fresh. You can tell that the cider makers here have had complete control of the process. Having access to the varieties of apple on site seems to have let them blend and balance the cider for a nice all round drink. I thought it would be a have more of an oak wood taste but this is more in the aroma than the palette.

The Australian cider style is a bit like the Satin Bowerbird but instead of picking out blue things it picks out the best bits of other cider traditions and methods from around the world and works them into their own creation. It also uses what it has on hand and does the best job it can with those assets.  Here the Napoleone family have used their wine making skills and the 250 odd hectares of apple orchards to produce a crisp, dry, Australian cider, and being outward looking to find that the Rhone Valley yeast performs better than the local, wild strains when it came to achieving the desired flavour.