Pagan Apple Cider from The Huon Valley, a traditional apple growing region of Tasmania. Pagan Cider source the apples from Lucaston Park Orchards. These guys have been growing fruit in Tasmania for 4 generations. What Pagan cider don’t do to their cider is the interesting bit. The Cider isn’t pasteurised, as this dulls the flavour. There is no sugar added because this is an Australian “Real Cider” and that is (morally) not allowed.  It does not have gluten or egg white. Odd things to put in a cider but they can be used as a clarifier, but this is a proper cider; its just full to the brim with Tassie apple juice.

From the Apple Isle, Pagan Cider are going back to the traditional cider making roots. Sourcing the apples from a Huon Valley single orchard. The Cider house is kitted out with modern equipment. According to Pagan cider the modern cider making methods with the traditional one orchard approach leads to a more constant flavour from batch to batch. Of course season to season the flavours of the apples will change but this is mitigated through careful selection of what fruit goes into the batches. 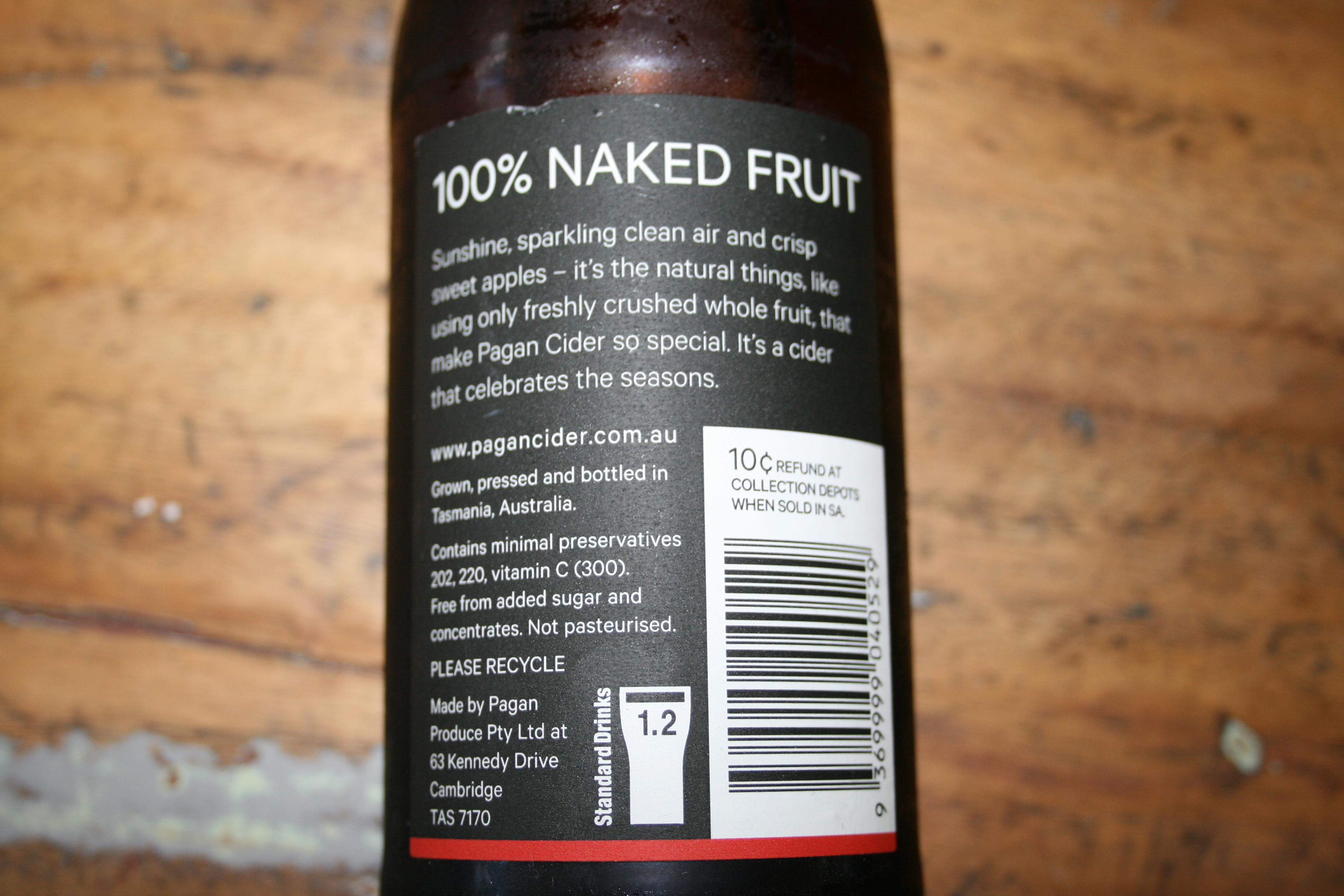 Pagan Cider is very proud to say that it is fruit, real fruit, that goes into their ciders. Just have a
look at their website pagancider.com.au, they put a big effort to explain that the market is flooded with, as Pagan put it, alcoholic carbonated cordials. That’s a great term. I’m a big supporter of reserving the name “Cider” being reserved for products that are made from 100% apple juice. If they are apple flavoured or made from concentrate, these products need a different name, Carbonated Alcoholic  Cordial or CAC sounds good to me.

The apricot and cherry aromas sit on a base of crisp apple notes.

Pagan Apple Cider is a very natural, easy to understand cider. Medium sweetness balanced with acidity. The sweetness doesn’t leave you with a sugary after taste. The full on taste is like the last mouthful of a fruit salad. It’s amazing to think that the Pagan cider is only made from  apples. The fine sparkly covers your tongue making you aware of the fruit flavours. This gives way to some subtle spicy highlights. The big flavour stands up well to being served cold; in fact Pagan Cider recommend it being served well chilled.

I would definitely have the Pagan Apple Cider again. Big fruity characters match with proper cider making techniques makes this a real winner for me.