Red Sails Medium Dry Gold Cider is the first bottle conditioned, keeved cider I’ve reviewed. When a medical researcher retired he set about cider making. Pairing together some of England’s best cider making apple varieties, with a cider making technique so intricate it could have only have come from France. So what is keeving and how does it taste?

Cuvėe as it says in French on the bottle or keeving in English is probably the most complicated cider making technique. So here is a quick break down. Normally the apples are scratted or pulverized ready to go into the press. Where as in keeving the smashed up apple is left to steep in the loosened juices to release natural pectinase and phenol oxidase enzymes. A few hours later the juice and flesh is pressed. Next, the juice starts to ferment. It is treated with an enzyme that pulls together most of the particles in the juice forming a cap over the juice. In the case of the Red Sail Medium Dry Gold Cider, the enzyme, pectin methyl esterase is imported from Brittany, France. This helps create an authentic Brittany flavour. The cap over the fermenting juice smothers the juice and is used to kill off the yeast at just the right time. This controls how much sugar the yeast is allowed to eat and therefore control the sweetness and alcohol content. I’m sure the French would explain it with style.

Red Sail’s orchard has prevailed for over 100 years. Most of the apple trees are over 25 years old. The apples grown here are mostly traditional British cider making varieties including; Somerset Redstreak, Yarlington Mill, Dabinett, Breakwells Seedling, Foxwhelp, Michelin, Brown Snout and Tremlett’s Bitter. To name some of the 40 varieties use in the blend including 20 French varieties.

So, if you’re wondering whys it called Red Sail? Well, when Dr Clive Crossley retired from medical research he had more time to sail traditional boats. The label features a boat from Brittany. 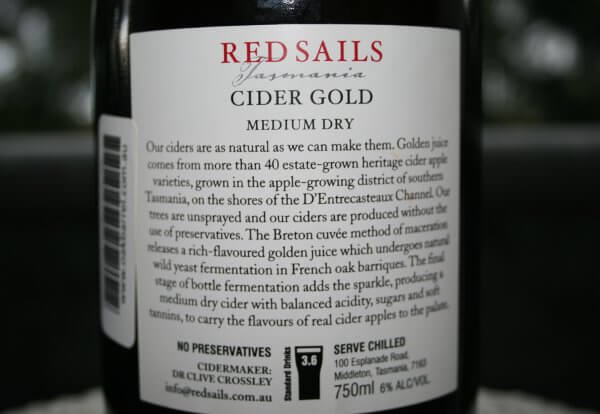 Red Sails Medium Dry Gold Cider features nice balance of sweetness and earthiness. There is a mild undertone of alcohol which is surprising as it only comes in at 6%.

The dark and bubble cider has a think and creamy mouth feel. This French style bottle cider is quiet cloudy which is unusual for a keeved cider. It holds a little bubble head. The alcoholic smell is converted on the tongue to more of a acetone flavour. This quickly gives way to a fruity caramel stage, like a rhubarb crumble. The finish is interesting in that it is sweet and sour with a subtle amount of oak similar to a Chardonnay. This is thanks to the wild yeast which is often many strains and not a single species, each yeast strain give off its own flavour creating this complex taste. Being a medium dry is a good description, one starts off thinking that it is very dry but then as you drink more it seems sweeter.

I did enjoy this cider, the complex taste makes you keep sipping to work out what’s going on. The 750ml champagne style bottle is used to hold the pressure that can build up during the bottle conditioning phase. However I’m never really sure how to serve such a drink. Do you split the bottle between 2 pints or is it best served in a champagne flute? I went for the pint option.
Keeved Ciders require a sound knowledge of the microbiological life inside apple juice. It’s clear that this former medical researcher knows how to make the wild yeast work for him.