There are some interesting  things happening on the South Australian Cider scene at the moment. The brothers at The Barossa Valley Cider Co. with their Squashed Apple Cider are a great example of this, going from strength to strength in the market.

For a while the art of cider making had been lost in Australia. There was a time when the only ciders you could get in pubs where mass produced and could not be described as “real cider” by any industry groups definition. On the other hand Australia’s wine industry has a long history dating back to the First Fleet. Today Australia makes some of the worlds best red wines and white wines that more than hold there own on the international stage.

Today some of Australia’s wine knowledge has been put to use making excellent cider from non-traditional cider apples. This is exactly the story of Oscar & Hugo Bowen, Brothers who learnt how to ferment fruit with Barossa Valley red wine grapes. Sick on the staining power of red wine their attention turned to the apples growing in the Valley.

There are notes of fresh cut grass but these are hidden beneath a strong front of apple blossoms. One closer inspection one can detect apricot and baked apple.

Squashed Apple Cider is very smooth in your mouth, a creamy texture only broken by the small tender bubbles that clear the palette.

The clear, golden-blonde cider with a big floral nose, is quite a sweet cider. At the same time it has a strong acid hit. 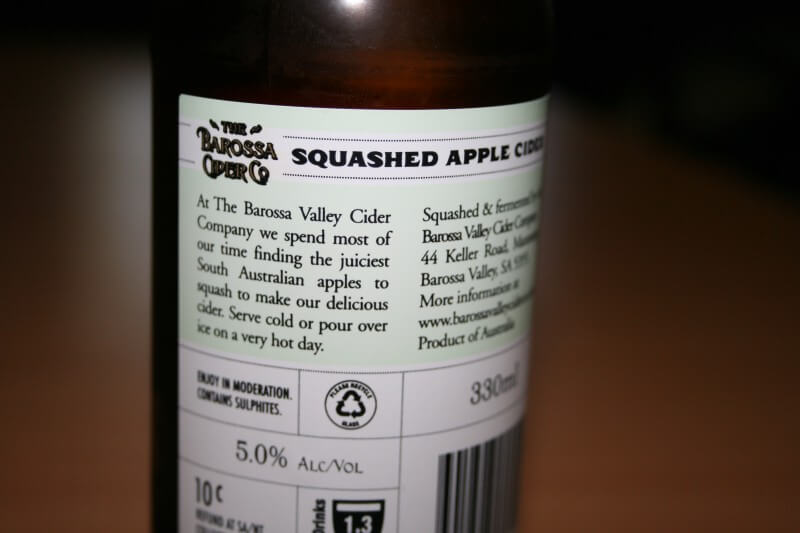 I like that the cider is not over carbonated this allows you to concentrate on the complex flavours.

With out ice the flavour might be over powering for some. When ice is added it seems more balanced and comfortable.

For all its complexity, this is a easy drinking cider. This would be a good afternoon drink to be shared at a barbeque. The sweetness would go well with some salty nibbles or even a steak sandwich with onions.

As Australia doesn’t have the cider making traditions like the UK or Europe so our cider makers have learnt there trade in the wine industry making an Australian cider tradition with crisp refreshing ciders suited the Aussie heat, in the same way Australian lager’s are targeted. The Barossa Cider Co’s Squached Apple cider is a perfect example of this. A family creation developed with wine knowledge with a big enough flavour to stand up to being served ice cold.