Frank’s Summer Apple Cider is as straight forward as cider gets. “We don’t muck around.” That’s how Frank grew apples. Now his grandaughter has taken over the “Woodside” orchard.  Some of the trees are over 80 years old which is a pretty rare thing on the Australian cider scene, but the Tasmanian Huon Valley provides the perfect conditions for growing apples as we’ve seen in the Willies Smiths and Pagan Ciders  reviews. 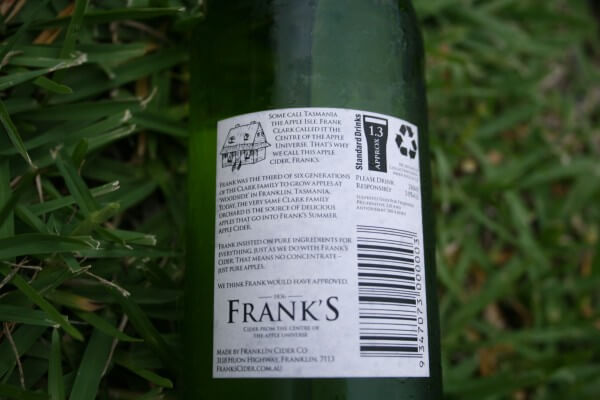 I had a chat with Naomie Clark-Port, the owner of Franklin Cider Co,  about cider making in the Huon Valley.

Real Cider Reviews: Tell me a bit about Frank’s  and why you got into cider making.

Naomie: I think I may have told you my family have been farming in Franklin since 1836. I am the 5th generation and Frank was my grandpa. So a love of farming keeps me growing apples and the booming interest in cider made us decide to get into it! My husband Tony’s dad used to make cider commercially in the 1970’s so that was another reason. We grow fruit with heaps of flavour due to our cool climate, and I knew we could make great cider down here in “The Apple Isle”

Real Cider Reviews: What types of apples are  used in the Frank’s Summer Apple Cider? I believe you have some very old trees down there. Do you use them? Do they affect the flavour?

Naomie: Frank planted many of our trees and we have several trees that were planted 100 years ago. In fact there is one tree down by the creek that was planted in the 1830’s. It’s huge!! We do use the fruit, but it’s such a tiny amount it wouldn’t change the flavour. We use a blend of tree ripened apples of many dessert varieties such as Golden Delicious and Fuji. Cool climate = depth of flavour.

Real Cider Reviews: Next for Frank’s?

Naomie: Our cellar door “Frank’s Cider Bar and Café” is nearly open. It’s been a long hard road to renovate the heritage building, but it’s looking good! I’m also about to undertake a whole new marketing campaign so keep an eye out for that! 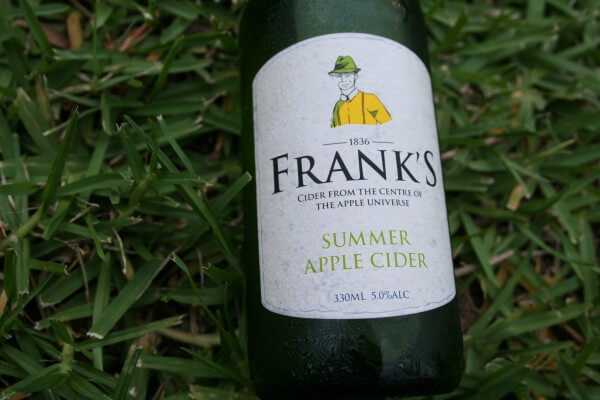 Lemony zestyness hits you in the face like a bucket of water. Big wake up call.

Pale brilliant colour is very inviting. The fresh lemon flows into the taste. With a gentle amount of sweetness the Summer Apple cider is quite moreish. A small bead of bubble makes for a smooth clean mouth feel. The finish has a little bit of a bitter sweet tang going on on the sides of your tongue.

Frank’s has a light, clean taste that doesn’t muck about; its straight to the point. It’s a “summer cider” and it’s refreshing. The fresh citrus taste. I have to admit that I had a lot of difficulties reviewing this cider. The problem being I drank it too quickly because I enjoyed it too much. Twice.