Since starting this blog I’ve been amazed at how many different Aussie ciders are out there. Do a search on Twitter for cider makers and you will be amazed at how many you will find.  Quite a few of the Australian cider are at the on the sweeter end of the spectrum. Sitting Duck Apple Cider stands out from the crowd being the driest Aussie cider I’ve tasted. Free from concentrate and only using local Adelaide Hills apples, It’s easy to see why its won awards at the Perth and Sydney Royal Shows.

Real Cider Reviews: Rocland Estate started as a winery. What prompted the expansion into ciders and perrys?

Nick: We were looking for something refreshing & crisp (other than wine) to finish off the long days over vintage time & realised that there was very little cider on the market made in a dry style.

Real Cider Reviews: You quite proudly say on your website “100% real apples and pears. Not from concentrate” That’s a great thing. Do you add any yeast or are you relying on wild yeasts?

Nick Penprase: We inoculate our cider ferments with a yeast strain that is used for the production of Champagne in France. We are very proud to say that we only use 100% Apples & Pears from the Adelaide Hills. The only other additive is a small amount of so2. Our ciders are vegan friendly.

Real Cider Reviews: Can you tell me a little about how you decide on these flavours? What apples / pear varieties were used?

Nick Penprase: We use a blend of apples & pears mainly from modern varieties which are sourced from Ashton in the Adelaide Hills. As we produce smaller handcrafted batches the blend of varieties does change each time but gives us the ability to produce a consistent style each batch. We are looking for clean refreshing fruit characters fermented out dry to give a crisp finish.

It’s very subtle but the apple blossom notes are the stand out here.

As I mentioned earlier this is one of the driest ciders going around. There is barely and sugar left in the drink. Once your tongue gets over the shock of the dryness there is a subtle tartness and bitterness from the fresh apples. There is a nice brisk fizz the feel like tiny pin pricks. It’s like a splash of water in the face to refresh. In the end there is the taste of a crisp new season apple. The after taste doesn’t hang around long but this is to be expected with such a dry crisp cider.

The end of a hot and dusty day. Also its pretty good with hot wedges. 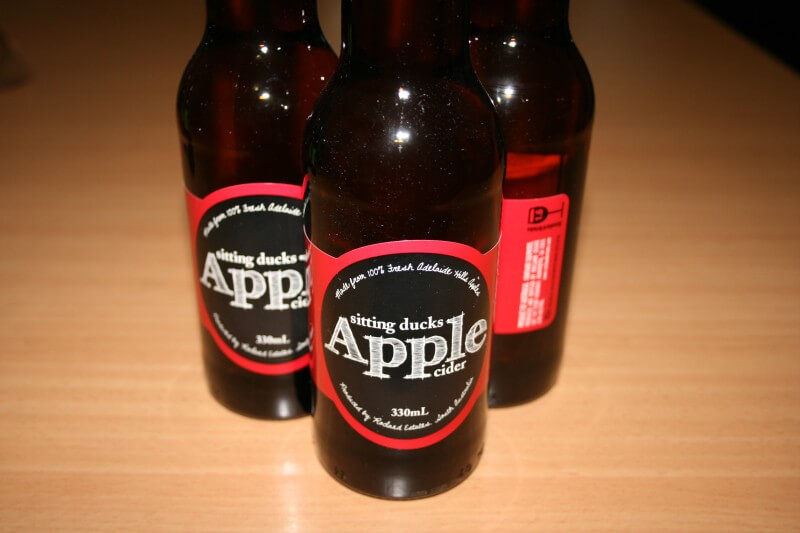 The Adelaide Hills are producing some very drinkable ciders at the moment. Sitting Duck should be put up as an example of making a cider that doesn’t need additives and is proud to say its 100% apple juice. I would love to know how much raw apple juice goes into a bottle of Mangers, 5 Seeds, or any of the other big brands. If it’s not 100% apple juice can we call it an Apple Flavoured Alchopop? Can it be taxed like a RTD (Ready To Drink or pre-mixed drinks). We should be supporting the little guys and stop them from being squeezed out by big players. I’m probably preaching to the converted here but Cider is an accent drink, only made from apples and may it continue to be. I’ll be talking more about labelling in the coming weeks. Stay tuned soon I will be reviewing Sitting Ducks “Peary” Perry.