After the great cider boom (which is still booming) pears wanting in on the alcoholic action. On the back of  cider branding came Pear Cider. Now I challenge anyone to give me a good definition of what a pear cider is. A cider is made from apples and maybe a little yeast and preservatives is you real must. Unless of course your from Sweden and then anything goes, but that’s a rant for another day.  A Perry is a cider made from a special type of pears call Perry Pears. These have wonderful names like Arlingham Squash, Moorcroft, Blakeney Red,  Winnal’s Longdon and Judge Amphlett. Pears are hard to grow. The fermentation is prone to infections. Perry can be hard to master but some say though that a good perry is better than a fine champagne. Now a Pear Cider, what is that? My best guess is: it’s a marketing idea to through another “flavour” out there and see if it works. Pears, once fermented are sweeter than fermented apples because of a sugar, sorbitol, can not be converted to alcohol. This might be an attempt to appeal to the alcopop crowd.
My opion is a Cider is made from apples, a Perry is made from perry pears and a Pear Cider is cheating at best and at worst a chemical filled fruit wine alcopop.If it only contains pear and apple juice what is the ratio?

Sitting Duck Peary. Well that’s a crafty little name isn’t it. They may not be perry pears but they are 100% pears. No concentrate, No artificial nonsense.

I spoke with Nick Penpras, sales manager at Rocland Estate, on the subject.
Real Cider Reviews: It seem like a lot of Australian cider drinkers don’t know what perry is. Partly because the we only see “Pear Cider”, a mix of apple and eating pears on our shelve. Is your “Peary” made with Perry pears? Do you think is consumers are becoming aware of pear only drinks?

Nick: Our Peary is only made with a blend of Pear varietals. Unfortunately there is very little LIP (Label Integrity Program) for cider in Australia at the moment. It is common that Australian producers will use apples in their Perry production. I feel once we have a better LIP in place consumers will become more aware of what they are actually drinking. Are you drinking real cider made from real fruit ? Is the number one thing I ask consumers…. 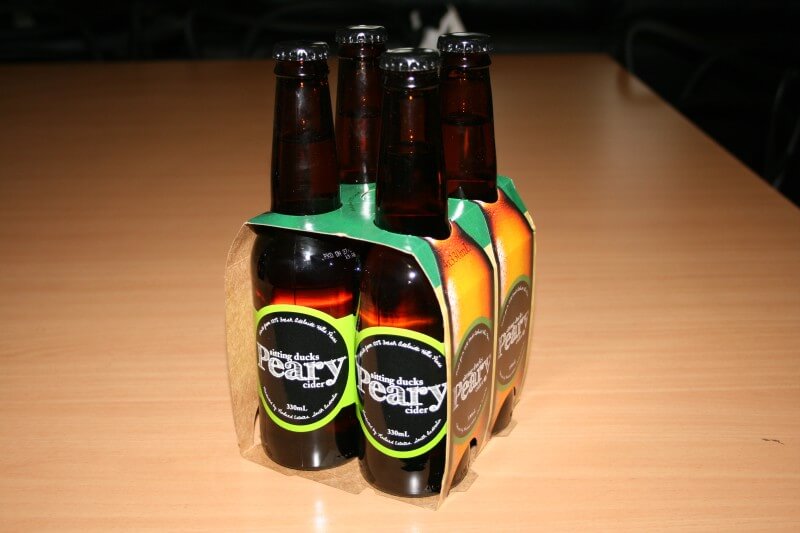 Fresh pear is the stand out here as you would expect from one 100% pear juice perry.

Crisp and just a little bit sweet. There is a sour bitterness about this perry it’s not over powering but it reminds you that you not drinking a cider here, it’s made from pears. It’s quite a complex taste that revels itself more and more as you go though the bottle. A subtle mint like freshness passes though. The pear is quite smooth on the mouth but just like its apple based cousin the fizz is very sharp.

Sitting Ducks Peary went down a treat with sweet and spicy Chinese food. Its cools the spice and the lower sweetness complements the honey chicken and the sweet chilli sauce.

As far as I know nobody is growing commercial quantities of perry pears in Australia. That is probably because the trees like to by themselves on hill tops, being all broody about their ugly little fruit.  They grow tall and they take forever to grow. “Pears for you heirs” as they say. That’s OK the Peary is an Aussie interpretation of perry. I’d go as far as to the best Peary I’ve every tasted.

Thanks To Rocland Estate for providing tasting samples.