The guys down at Willie Smith’s have a new cider. Willie Smith’s Bone Dry Cider, is, as the name suggests, it’s a dry cider. While their first cider I reviewed was based on the French farmhouse style, the Bone dry is based on a traditional Herefordshire style. The big difference between the Herefordshire and this Tassie cloudy is the apples used. Here we have eating apple and not the traditional cider varieties. Sam Reid, the head cider maker at Willie Smith’s told me, the Bone Dry is a favourite among the local farmers when served at The Apple Shed. It’s earned itself the nickname “The Knee Bender” as its easy drink and quite strong.

The Willie Smith’s Bone Dry Cider is fermented longer, this reduces the sweetness and increases the alcohol content. Secondary fermentation and ageing happens in oak barrels which imprint themselves on the finished product. The cider is dark and cloudy. It has a vigorous sparkle straight from the bottle.

There is something that reminds me of a wool shed or the moment before the rain comes down on a dusty plain. The sense of place, or terrior , is strong here. You get a very pleasant earthy smell. I put that down to organic soils that nourish the trees. 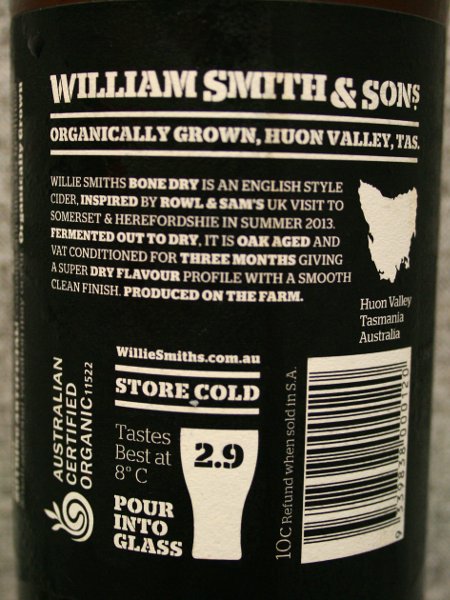 To state the obvious, it’s bone dry, there is no sugar left in the bottle. Instead the sugar has been convert to alcohol coming in at 6.8%. The absence of sugar leave room this awesome dusty flavour, like the old dirt road leading to the wool shed. The dustiness leads onto the barnyard funkiness. The funk is a bit like a creamy cheese. Deeper down there are layers oak and green apple. The finish is crisp and leaves you thinking about another mouthful.

The first time I tried this, it was with a Chicken with a buttery chorizo and bean stew, the dryness cut though the butter, cider matches perfectly with the chorizo.

The thing I like about Bone Dry and Willie Smith’s in general is that the cider suits where is comes from yet learns from the long-held traditions from cider making strong holds like France and England. You get a sense of the quality of the soil the apple trees where in, you know it was aged in a shed. It smells rural, and that’s a good thing. Know you that the men behind it are proud of this Tassie Cider.